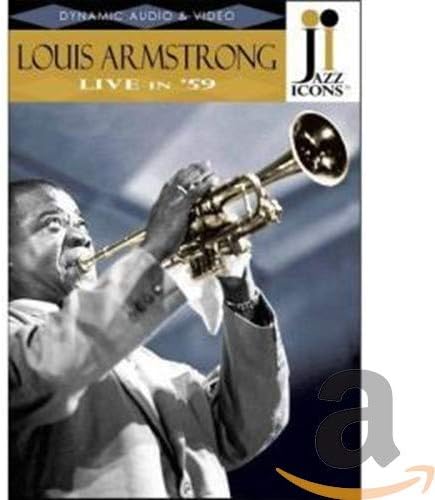 "span"The very existence of this hour-long concert, billed as perhaps the only complete Louis Armstrong show ever recorded on film, is a treat; the fact that Live in '59 is excellent both musically and technically makes it truly special. By the time of this Belgian gig, Armstrong was decades past the groundbreaking work that established him as the greatest and most influential instrumentalist and vocalist in jazz history. Yet he was still in fine form; then in his late fifties, he was playing a bit less and singing a little more, but his chops were in good shape, and his trumpet sound (described by Wynton Marsalis in the DVD liner notes as "big and open with a deep spiritual essence--a sound closest to the Angel Gabriel") remained inimitable. The band, with trombonist Trummy Young, clarinetist Michael "Peanuts" Hucko, pianist Billy Kyle, bass player Mort Herbert, and drummer Danny Barcelona, is at once tight and loose, enough at ease with the music to let it breathe on its own. As for the repertoire, it's a virtual primer on Dixieland and early jazz, including "When It's Sleepy Time Down South," the riotous "Hold That Tiger," "Now You Has Jazz" (with Young helping Satchmo recreate his duet with Bing Crosby in the film High Society), a tour de force rendition of "Stompin' at the Savoy," and two Armstrong standards, "Mack the Knife" and "When the Saints Go Marching In" (saucy, plus-sized vocalist Velma Middleton appears for a couple of numbers at the end, including an innuendo-laden "St. Louis Blues"). Typical of the Jazz Icons series, both audio and video are amazingly clean and clear. But perhaps best of all is the opportunity to witness Louis, his musicians, and the audience simply having a ball. In retrospect, Armstrong's mugging--the wide eyes, the parading around the stage, the constant shucking and jiving--led to accusations that he was pandering to his white audiences like some latter day minstrel, and many musicians subsequently adopted a too-cool-for-the-room stance in response. But "Pops" wasn't just a musician; he was an entertainer. "What you're there for," he once said, "is to please the people," and there's no doubt that Live in '59 will do exactly that. --Sam Graham